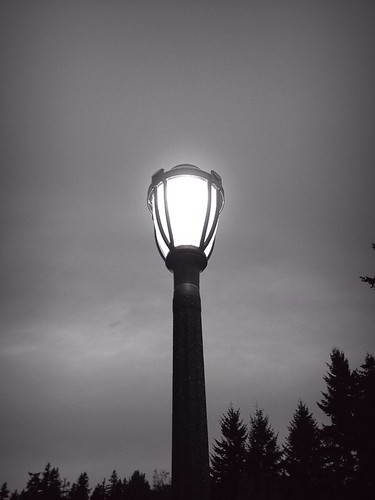 Very proud of this, taken with Perfect B&W.

I'm doing some writing-my-thinking-process-out-loud kinds of posts about Wine-Dark Sea over on Facebook, where y'all are welcome to check me out. I'll round them up here from time to time as well.

Wine-Dark Sea: About the title

As people who've had to develop me in the past know, I have a regrettable tendency to get clever with allusions. Sometimes it's just sheer stunting, but sometimes it leads to something interesting. I think this is one of the latter kinds of moments.

First, the default setting is literally dark: far below the surface of the sea, where natural light never descends. The only inorganic light at the bottom comes from below, where volcanic rifts are active, and from very occasional other chemical processes that make some light. Anything else was made by living beings, or by their tools.

Second, even when characters do ascend toward the light, a lot of the light they'll see is red rather than blue. This is a setting in which H.G. Wells' Martians have conquered the entire land surface of the Earth. In _The War of the Worlds_, land they conquered got seeded and/or infected with a vivid red weed, presumably responsible for a lot of the redness of that cosmos' version of Mars. In Wine-Dark Sea, the red weed or other plants like it has invaded much of the sea, spreading out from coastlines all over the world and accumulating in areas not disturbed by fast currents and storms. Only some areas of open sea remain to let the light of the sky come down and remain untinted by alien life.

And that's why "Wine-Dark Sea".

I set myself up for an interesting technical challenge. The WDS setup includes things like "Long ago, the Martians..." Well, okay. But how long ago is "long ago", and what's this about Martians?

What I want to do is present two parallel kinds of advice to players and GMs tinkering up their particular campaign:

#1. You can leave this vague, and here are some thoughts about what happens if you do that.

#2. You can pin it down, and here are some thoughts about it matters if you do.

Take "long ago". (Please! _da-dum tish_) Sea creatures tend to go to one of two extremes, from a human point of view: they have lifespans much shorter than ours, or can last much, much longer than us. So if "long ago" is "several decades, a couple of human generations at least", then some characters and a significant number of NPCs will have grown up in the world before the Martians, while others have multiple generations of ancestors who are native to the world as it is. If "long ago" is "several centuries", then there will still be some NPC elders from the world before, but it's very unlikely that any PCs have that experience. If "long ago" is "millennia", then a single survivor or enclave of survivors is a major plot point.

And what's a good default value? Probably something like "it's mostly a matter of often-conflicting stories, propaganda campaigns, community legends, and such, unless you invest some efforts in pinning down reliable sources", but I'm still tinkering.

Same kind of deal with "Martians". Here I do know what the default is. It's not like many sea-bottom dwellers are astronomers, but "they came from Mars" is one part of the invasion and conquest history that the stories get right. The Martians themselves are the brilliant soft-bodied, tentacled things of Well's story, blood drinkers, builders of tripodal war machines, and so on. That's going to be entirely enough for a lot of campaigns.

The goal here is to avoid the kind of sterile setup too easy to stumble into in gaming, where you can fight forever on forums, blogs, fanzines, etc., about the details but not very readily have any of them matter in play. It should be okay to be vague, and productive to be specific.

The Kickstarter is over and there's more than enough money to pay me to write a chapter-length setting for Apotheosis Drive X. So that's what I'm going to be doing in the next few weeks.

I am really, really excited about this. Y'all long-time readers have seen me suffer through a lot of setbacks and failures. I think I've learned the lessons and changed enough of my physical and social situation that this time I can avoid all that and bring it through to a happy completion.

One really neat thing is that the folks at Machine Age Productions operate on the principle of openness that's done so much good for the gaming biz of late. So I have a thoroughly free hand to talk about this work as I go. And believe me, I will. :)

This is kind of fun right now. There's a day and a half to go on the Apotheosis Drive X Kickstarter, and we're $900-ish dollars away from the level need to pay for me to write a setting of future sea life versus Martians. Since I'm not responsible for any of the business end of ADX, I get the fun of watching and wondering without feeling any big burden about it.

I do hope it happens, though. I feel ready to write something again.

Notes on re-reading Iain Banks: Consider Phlebas. When I first read this, I wasn't prepare for an intriguing modern space opera intrigue-and-adventure tale to become an epic tragedy. This time I was, and you know? It's still a wallop. The complex converging flaws that make the climax flow so naturally from all the decisions before are beautifully delineated. I find that even the Idirans are...not sympathetic, but capable of evocation some identification in the sense that I can look at the constraints of their biology and culture and think some about the constraints that lie on all of us, and on me. It works.

Which isn't to say that it's perfect. Banks always has some problems with genuinely gratuitous overkill. Maybe the Eaters on Vavatch Orbital would have worked better if they'd gotten a scene's worth more development, some more obvious-to-me connection to developments elsewhere in the war zone, the way that the Damage game does. (I suppose you can read them as a satirical microcosm of the conflicts all sentient beings subject them to, but that only occurred to me after reading, and it seems a bit strained.) I'd also have liked a bit more from Balveda's perspective to better set up her fate as described in the Dramatis Personae section. And so forth and so on.

Nonetheless, it's a darned fine book and I'm happy to have read it again.

Following a tip from Geoff Skellams, Frances and I signed up at Munzee and went out on a first hunt this evening. We had a lot of fun roaming the neighborhood, and captured three markers, along with some bookstore browsing, some photography (see below), and a whole lot of conversation.

Now about this door. It made me feel like some of my homework had moved into the new neighborhood along with me. Or perhaps some of Rich Dansky's or Dennis Detwiller's homework. 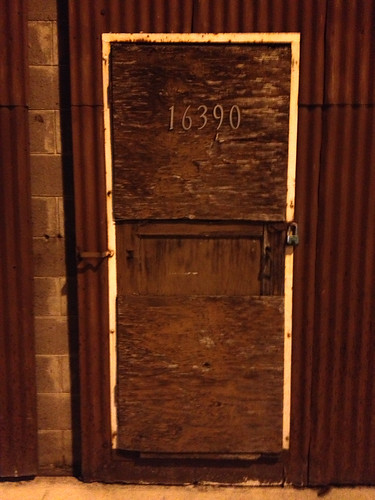 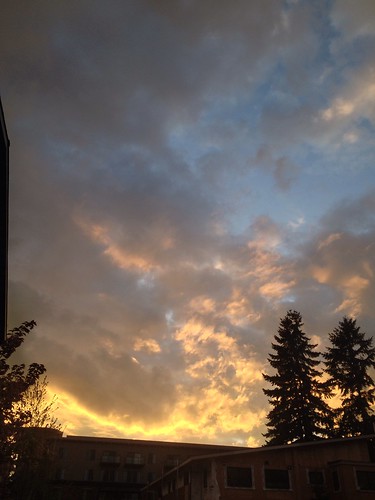 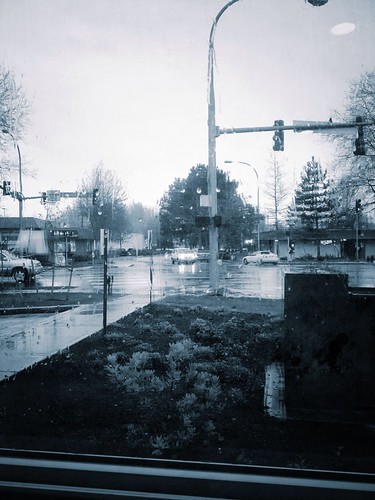 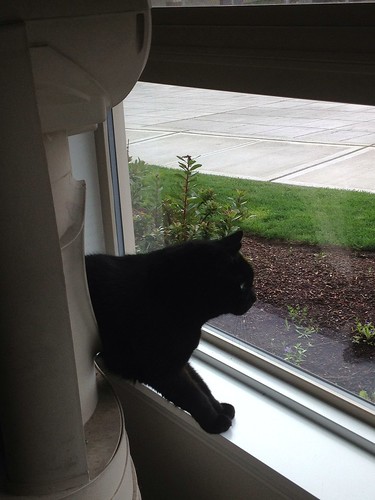 In addition to moving, I replaced my 2007 vintage not-at-all smart phone with an iPhone 4S, and I've been experimenting a lot with it. Here you go. 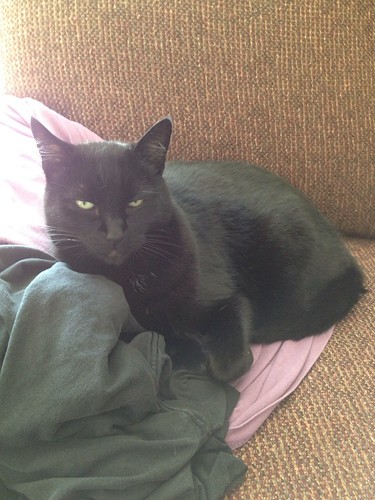 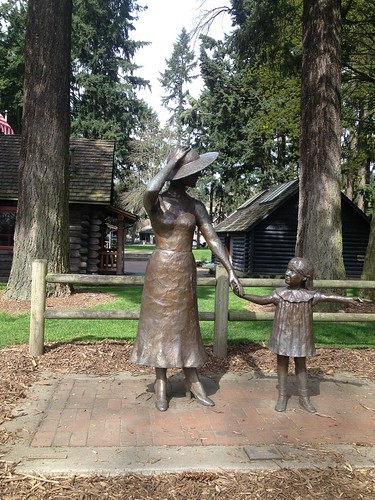 This instantly became one of my favorite park statues ever. 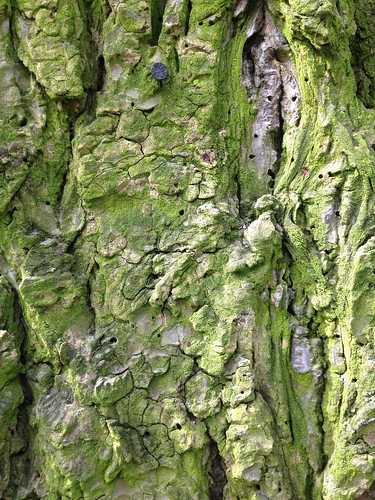 I'm very pleased with the iPhone 4S camera for this sort of texture shot, given how much I like to take such.